20th Anniversary of the Birth of a Nappy Hair Affair!

"We teach you to love the hair God gave you." Malcolm X 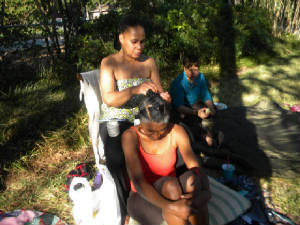 Twenty years ago in May, I had my first affair for women with nappy hair. It was intended to be a simple hair-grooming session, an opportunity for me and my girlfriends to get together on a Sunday afternoon and do our own hair.                                See video of The Original Hair Day

There were some who thought I was trying to revive an African tradition, but as much as I embrace some traditions of the motherland, what I had in mind when I decided to have a gathering wasn't that deep. All I wanted to do was offer a place for my friends who wear African-inspired and natural hairstyles to be among kindred spirits and come get their hair done for free.

At my house their unapologetically nappy heads would not stand out in the crowd. On that one afternoon they could be assured they would have majority status. At my house their royal crowns would be the rule, not the exception. 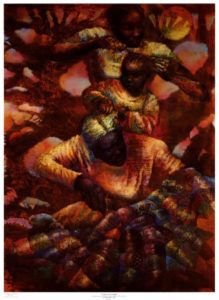 I also had selfish reasons for sponsoring the gathering. I wanted to take a trip back to my childhood. I missed the moments of bonding when the females in our house got together to do hair.

I am not talking about the traumatic Saturday night rituals when my mother fried our hair in preparation for church on Sunday morning. That’s when the sight of her brandishing the hot comb, the hissing sound it made when it came into contact with my grease-laden hair and the peculiar smell of something burning on my head made me wish I was born bald.

What I missed were the more natural moments, when my mother placed her healing hands directly on my head.

I remembered how comforting it was nestling between her strong knees as she oiled and massaged my scalp with her fingers before brushing, combing and arranging my hair into a simple style of plaits or ponytails.

I would lean back, close my eyes and surrender to her firm but gentle touch.

Being the eldest daughter, I often did my younger sisters' hair, and when my mother was too tired to do her own, we would do it for her. Those were the times when we were closest. Having the hair affair would give me an opportunity to recreate such moments at my home with my extended family of sister-friends.

I got the idea one day at the office after listening to my friend and co-worker lament about how hard it was to find the right hairstylist to do her locks. As a temporary solution I suggested that she come to my house so we could do each other's hair. I told her I knew other women with similar concerns, so we could make it a communal affair. 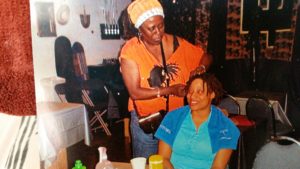 I decided to have it on the third Sunday in May. It was an experiment. I didn't really know what to expect. I never imagined that twenty years later I would still be having what has now come to be known as Hair Day.

Hair Day has evolved into much more than grooming sessions. At these gatherings my sister-friends and I form a circle of solidarity and support. We celebrate our hair through storytelling and poetry readings and endless testimonials about our journey to appreciate ourselves as we really are.Hair Day is a time when my friends come to relax. They come to talk and sometimes vent about those who have judged them harshly for their choice to be themselves.

Our circle is an eclectic mix of Ivy League pedigrees and sisters with no degrees. We have mothers and daughters, women who work and women in transition. We have artists, writers, teachers and students, African dancers and sisters who drum.

My first hair affair intrigued my friends who wore perms. One even got offended when she didn't get an invitation. It wasn't that I had anything against her— some of my best friends wear perms.

"So is my hair not nappy enough?" Jean asked me. For obvious reasons I didn't think she'd be interested in attending, but she knew that I invited another friend, Karen, who also wears a perm.

"My hair is nappier than hers," Jean whined, and to prove it she proceeded to part her relaxed hair with her fingers to show me her new growth. 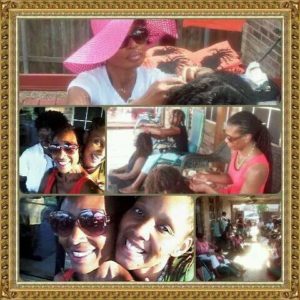 I was flattered and amused. Jean wanted so much to be invited to my nappy hair affair that she tried to produce enough kinks to qualify for admission. I told her that wasn't necessary and invited her to come anyway.

She never showed up but twenty others did. At three o'clock, women with skin kissed by the sun gathered in my backyard on that warm spring Sunday afternoon and transformed it into a garden of locks and twists, Bantu knots, braids and Afros in full bloom. To set the tone I posted a sign in the kitchen:

"Welcome to my Happy Nappy Hair Care Affair. Make yourself at home."

"Find a seat on a chair on the floor. Help yourself to whatever you brought to eat, but don’t bother me because I’m getting my hair 'done.' So you best find someone to do yours."

The message was clear. This was an unstructured, self-serve hair-care affair. My home is a no-shoe zone, and my guests seemed more than willing to shed their footwear and get on common ground. They deposited their potluck dishes in the kitchen then returned to the backyard where they gravitated toward my deck. They briefly exchanged greetings then moved quickly into conversations about hair.

Every conceivable topic was covered. They swapped hair-care recipes, how witch hazel reduces buildup in locks and how lemon juice keeps them tight. They shared hair taboo and superstitions.

Eventually the women got around to what the gathering was all about. They chose partners and got busy grooming hair. We worked to the sounds of reggae, merengue and jazz.

It was beautiful. Some worked while standing, ot

hers sat in stair-step fashion, palm rolling, twisting or otherwise fussing over the head of the person in front of them.

Their arms were extended like branches of a family tree and moving nonstop. Watching them work reminded me of the painting Links and Lineage . The painting by Paul Goodnight, a Boston-based artist, depicts a family tree of black women—from the elderly matriarch to the youngest girl—engaged in the ritual of grooming each other’s hair.
What was happening on my back deck was like seeing Goodnight’s painting come to life.

Denise, one of the “token permies,” was so moved by what she was witnessing that afternoon that she asked for us to take her back to her roots. She asked me for a pair of scissors.

“Does anyone know how to cut hair?” she asked. She insisted that one of us cut away all traces of her relaxed hair.

Annette, a willowy artist, accepted the challenge and took the scissors. Now, the only real experience Annette had cutting hair was when she cut her own locks and used them in her artwork.

Denise wasn’t worried. “If there was ever a time to do this, it is today,” she said as she settled into a chair.

Annette handled Denise’s head like it was a sculpture in progress. Formost of an hour Annettemeticulously snipped and shaped until all that was left on Denise’s head was a short, wooly layer of virgin hair, softly framing her face.

It was a nappy work of art, which drew applause from the sisters who watched from the sidelines and a warm hug from Denise, who was ecstatic over her new natural look. 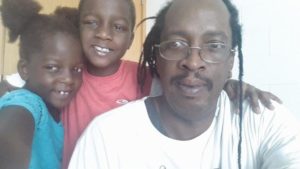 Watching Denise’s transformation after Annette’s shearing was a powerful moment. I didn’t want the evening to end. Apparently my friends didn’t either. The last one left at 1:30 A.M.

As I said, I had no grand intentions when I had my first Hair Day. I didn’t even think beyond the first one. Yet it evolved into something more than I ever thought it would be.

Now everyone has gotten into the act. Men and children also join us for a little nap nurturing and my Hair Day concept has spread to many cities in the United States and abroad. In 20 years, my nappy hair affair has become a real family affair. And that’s all good.